Is there a doctor in the House — or Senate? Medical trainees learn to advocate – AAMC 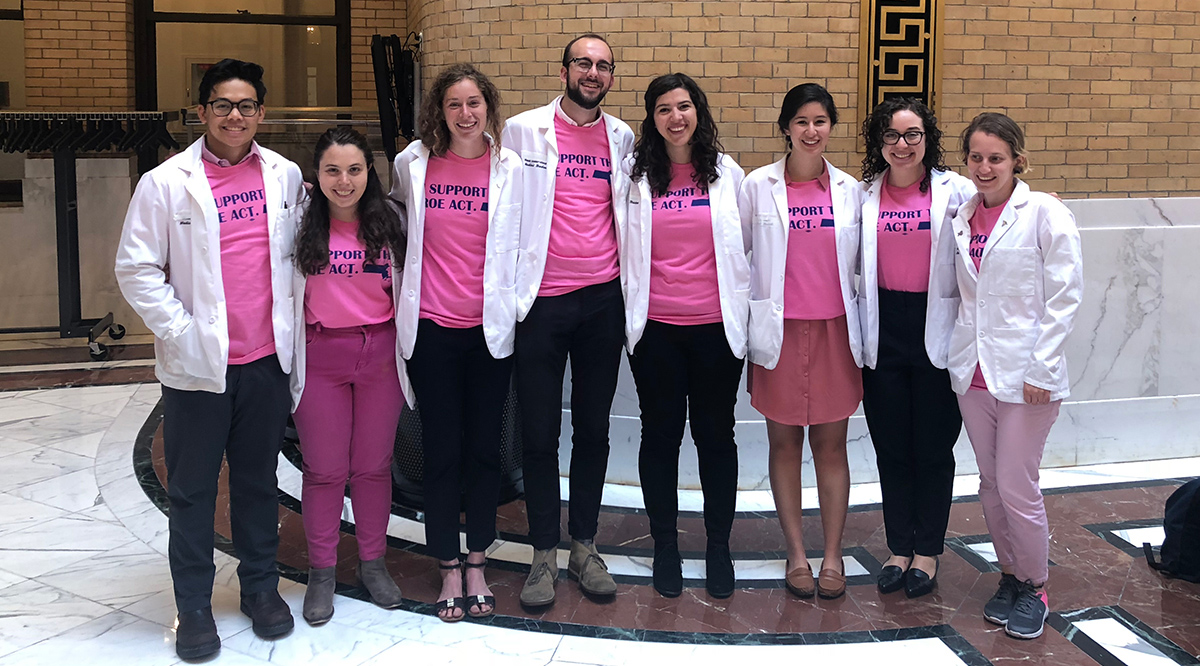 Grassroots organizing. How a bill becomes law. Key elements of an effective op-ed. These are not exactly subjects you’d expect to find alongside microbiology and gross anatomy.

But medical educators are teaching these and other policy-related topics to students and residents hoping to support patients far beyond what’s feasible within the confines of exam rooms and hospital wards.

“The pandemic highlighted what we already knew: that physicians cannot just sit on the sidelines when it comes to policymaking. We must bring our scientific expertise and patients’ experiences to the table,” says Lanre Falusi, MD, MEd, medical director of advocacy education for the Child Health Advocacy Institute at Children’s National in Washington, D.C.

The Declaration of Professional Responsibility from the American Medical Association encourages physicians to advocate for “political changes that ameliorate suffering and contribute to human well-being.” The American Academy of Pediatrics and other groups also urge activism.

That means medical trainees need to understand many key policy-related issues, experts say. Among them are racial inequities, insurance coverage, disability rights, and the need for access to safe housing and healthy food.

“The pandemic highlighted what we already knew: that physicians cannot just sit on the sidelines when it comes to policymaking.”

In 2020, 77% of MD-granting schools provided at least one course that covered advocacy in some way, a 2021 Academic Medicine study found. Training options range widely, from a few hours to several years and from online modules to in-person sit-downs with legislators. Most classes are optional.

Whatever the format, offerings are on the rise. In 2013, 696 medical school courses covered policy or advocacy, according to the AAMC’s Curriculum Inventory. In 2020, the tally neared 1,200.

“We are increasingly seeing interest in health equity, advocacy, and training on policy,” says Falusi. “That’s happening on a broad scale around the country.”

While some wonder if advocacy education steals time from crucial lessons in scientific knowledge and clinical skills, supporters see advocacy as a vital tool that improves communications and complements clinical coursework. “Students have to speak up because they’re the ones who will inherit the fallout from bad health-related policies,” says Amy Clithero-Eridon, PhD, who runs the training in health policy and advocacy at the University of New Mexico (UNM) School of Medicine in Albuquerque.

“We have children living in places with mold, dust mites, and other conditions that are not conducive to health and have long-lasting effects,” she says. “So if you think about it, housing is health care. Health is not just about diet, exercise, and medication. It’s housing and education and income.… There’s so much that plays into health.”

At Children’s National, trainees can hone those skills in a wide array of formats, including a four-week, hands-on training in the hospital’s government affairs office. Medical students can even apply to match into a three-year track in which participants study advocacy, equity, and community health that runs concurrent with all their other residency requirements.

That program taught Monique Quinn, MD, how to distill a policy proposal into bullet points for a 15-minute meeting with lawmakers. She also learned to anticipate and address opposing views.

“I was urging my representatives to continue Medicaid funding for childhood vaccines. In my hometown, many people use Michigan’s religious and philosophical exemptions [to avoid school vaccination requirements],” so some legislators might not consider vaccination coverage a high priority, she says. “But I argued that fairness requires access to vaccination for every family that wants it regardless of their ability to pay.”

Crafting a powerful op-ed requires similar attention to an audience’s needs, says Megan Sandel, MD, faculty director of advocacy training at BUSM. In that program, students and guest lecturers teach electives that run through all four years, taking from 4 to 8 weeks and 20 to 40 hours.

“An op-ed needs to be brief and clear,” says Sandel. “As scientists, we often over-complexify. We say ‘38.9%,’ but in an opinion piece, we should say, ‘4 out of 10.’ And though you need data, sometimes it’s more about emotion than facts when you want to get people’s attention.”

Another key skill is recognizing the difference between speaking as a private citizen and speaking for one’s institution, notes the AAMC’s Guiding Principles for Civic Advocacy. In addition, some programs have specific limits of their own. At the University of Illinois Chicago (UIC) College of Medicine, for example, learners can’t lobby legislators because theirs is a state school. Instead, participants in an 80-hour, two-week elective research questions that legislators identify as significant. Among other topics, lawmakers have asked learners about gun safety, casino expansion, and legalizing recreational marijuana.

“She talked about leaving an hour early everywhere she goes in case a bus won’t stop for her, and about concerns over insurance coverage for medical equipment,” says Torrice. Even more powerful was the woman’s efforts to stop a private school from using a controversial behavior modification technique that delivered electric shocks to the skin of students with intellectual disabilities.

As a nondisabled person, Torrice had felt wary about launching into disability-related advocacy. But the speaker’s experiences changed her mind. “I did not want to wait anymore to work towards a better society for individuals with disabilities,” she says. In her final advocacy project, Torrice urged improving accessibility within her school’s spaces and creating a more robust disability-related curriculum.

Applying lessons on the ground

Medical trainees are well-positioned to notice the social and political factors that can hobble patients’ health, experts say.

Like physicians, “trainees are with patients and families during some of the most vulnerable times in their lives, and have significant experience seeing what people go through in the health care system,” says Falusi. “And they have the ability to work with families and communities to propose solutions.”

Students in UNM’s advocacy training, which is part of the required family medicine rotation, address a wide range of concerns. Most — 36% — choose to explore health system factors such as health care costs and insurance coverage, according to a 2022 Family Medicine study. Public health efforts such as needle exchange programs and taxes on sugar-sweetened beverages ranked second, at 34%.

Programs offer participants various options for deciding which issues to pursue. Among other inputs, residents in the two-year health equity and advocacy program at Northwestern Medicine in Chicago hear monthly lectures from experts before choosing a project topic.

“An OB-GYN might come talk about abortion laws,” says program director LaTasha Nelson, MD. “Illinois has fairly liberal laws, so we’re seeing a flood of patients coming from other parts of the country. A lobbying effort might be requesting more funding to serve patients and help reduce current appointment lag times.”

Third-year UNM student Tess Lemon chose her advocacy topic based on a recurrent pattern she saw in her clerkships: children whose health was threatened by overweight and obesity.

The statistics supported her concerns, with 32% of New Mexico children aged 10 to 17 considered overweight or obese, Lemon says. And the state’s large Hispanic population had even higher rates. “Some of these children live in food deserts or areas where they don’t have access to places for physical activity,” she notes.

So Lemon focused her recommendation on a proposal that could reach all kids: requiring daily, hour-long physical activity classes in schools. “I’m really passionate about pediatrics, so it was great to figure out what I wanted to happen, why, and who could help,” she says.

“Representatives want to know the possible health effects of policies they are considering. Because in the end, really all policies are health policies.”

At UIC, because legislators select the topics students research, pursuing one’s passion isn’t necessarily an option. But there’s much to be gained anyway, says Jalene Shoener, MD, who directs the advocacy course.

“One legislator asked for [medical] information as the state was considering legalizing marijuana. She was fairly conservative, and the learners had a different political bent. It was a valuable experience for them to step into her shoes and think about what concerned her. They also have the benefit of making connections with legislators representing areas where many of them will end up practicing medicine.”

Generally, legislators tend to appreciate trainees’ input, UNM’s Clithero-Eridon finds. “Representatives want to know the possible health effects of policies they are considering,” she says. “Because in the end, really all policies are health policies.”

Gains for those who give

Advocacy courses for medical learners are meant to help patients and society. But participants say they gain much as well.

Lemon found that her advocacy experiences boosted her self-confidence. “When I first heard about the project, it sounded really daunting. How can I come up with a health policy? But there was a realization that as long as I put in the work, this is actually something I can do,” she says.

“There were so many times in my clinical experiences that I felt a little hopeless because I couldn’t help patients…. But whenever I was in rooms talking about what can we do — not for this one patient but for lots of patients — it made those scary, hopeless situations feel less overwhelming.”

Other participants appreciate the sense of support and connection with like-minded advocates that courses can provide.

“When I went to lobby my representative, I had some nerves because I had put my heart and soul into this, I was passionate about it,” says Quinn. “But I had a mentor who worked with me one-on-one to prepare and who went with me that day. That helped me feel really supported.”

“There were so many times in my clinical experiences that I felt a little hopeless because I couldn’t help patients [who had] problems that felt too big for me to change,” says Torrice. “But whenever I was in rooms talking about what can we do — not for this one patient but for lots of patients — it made those scary, hopeless situations feel less overwhelming.”