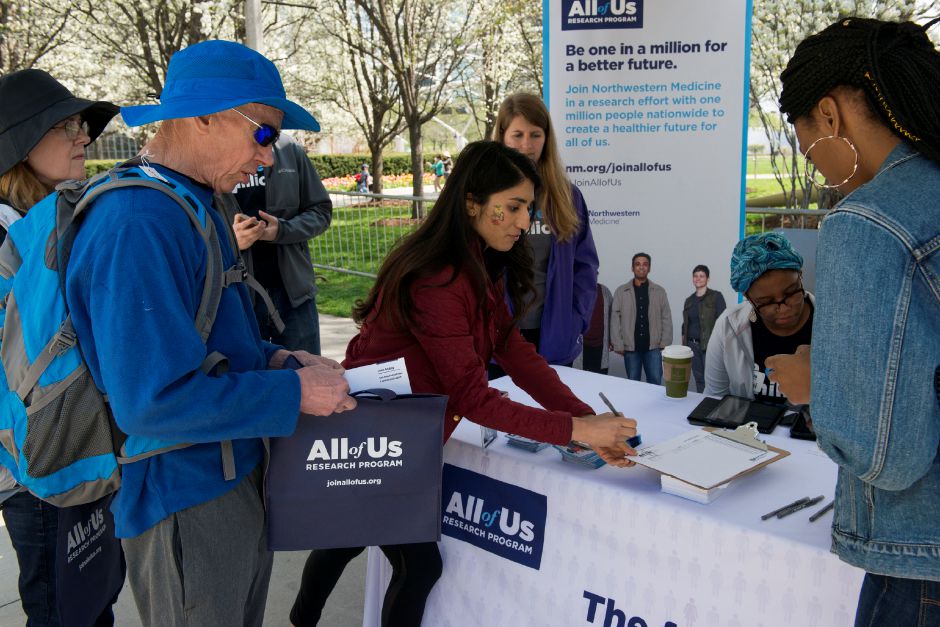 MERIDEN – Daisy Burgos is one in a million – or hopes to be. In 2019, Burgos participated in an All of Us, a national research program that seeks to create a diverse database by collecting health information from a million participants over the course of a decade.

She remembered she was waiting for a doctor’s appointment at the Meriden Community Health Center and was approached by an All of Us coordinator. She gave her medical information and eventually ended up sitting on one of the program’s community advisory boards.

“Y decided to participate and follow the steps,” she said in Spanish in an online interview. “And then I liked it, so I stayed.”

The program has been active in Connecticut since its national launch. In July of 2016, the Middletown Community Health Center hosted one of the six pilot sites. By December of that year, All of Us had received a $1.5 billion appropriation from Congress for a 10-year study managed by the National Institute of Health.

All of Us has since branched out to include three new sites in New London, New Britain and Meriden.These towns, including Meriden, are ideal locations to recruit diverse participants, as almost twice as many Latinos in the four towns than in the national average, according to data from the 2020 census.

The Meriden program at 134 State Street has faced a number of setbacks due to the pandemic and staffing shortages. However, the center reopened in October and has since started recruiting participants not affiliated with the Meriden Community Health Center. So far, Meriden alone has enrolled 697 participants, said Meriden Research Coordinator Thelma Nanbigne. Nationwide, the program has enrolled over 523,000 volunteers so far.

According to the report, about 32,000 people participated in drug trials in 2020. Of those, 75% of participants were white, 8% Black, and only 11% Hispanic. These numbers represent a large gap between the clinical drug trials and the actual population, as the 2020 census reported that 58% of the population was white, 12% Black, and 19% Hispanic.

This gap can lead to issues in drug safety and medical information as people of different ages, races, and ethnicities may react differently to certain medical products. For this reason, the FDA encourages diverse participation in clinical trials.

“Participants in clinical trials should represent the patients that will use the medical products. This is often not the case—people from racial and ethnic minorities and other diverse groups are underrepresented in clinical research,” the FDA said on their website.

However, despite the need for diversity in medicine, the participation of minorities in medical research has been an ethical problem, famously in the well-publicized cases of Henrietta Lacks, a Black woman whose cancer cells were taken by researchers without her knowledge or consent. Lack’s cells have been invaluable to medicine.

By creating a diverse database that is open to researchers and citizen scientists, All of Us is trying to challenge the status quo.

Melissa Sigua is the Participant Experience Lead and works with the Middletown location of All of Us. She explained that the goal of the program was to give volunteers like Burgos a bigger voice in the future of medical research.

“We don’t call our volunteers ‘subjects;’ we call them ‘partners’ or ‘participants,’ ”Sigua said in an online interview.

Sigua explained that once a participant joins, they are invited to share information like electronic health records, basic demographic information, anonymous hip and waist measurements –and maybe even blood or urine samples. However, she stressed that the level of detail in the study is related with the participant’s comfort and are able to opt out whenever they do not feel comfortable.

Sigua also said that participants have access to all their records once the study is done. After participating, volunteers receive a free “fun facts” result on certain genetic traits, like whether a person likes cilantro. They also receive their own genetic ancestry, the risk of certain health conditions, and how the body might react to certain medication. Sigua added that the program also refers volunteers to a genetic counselor if they present certain concerning genetic traits.

Thelma Nanbigne has been working with All of Us for the past year. She is a jack-of-all trades as she does participant outreach, education, surveys, measurements, and even blood samples. However, her favorite part of the program is sharing traits and genetic information with participants.

“They get to not only contribute, but also learn more about their health,” she said. “I know it’s expensive, getting certain DNA tests done. So having this for free is really, really good for a lot of people.”

Sharing information with participants and educating them on their significance  is unusual in medical research, as results from medical studies are often only published in peer-reviewed medical journals and participants without medical degrees often do not understand them.

Burgos was one of the people invited to share blood samples. As a two-time cancer survivor, she has a well-justified hatred of needles.

“Since I’m a cancer patient; they mangled my body a lot with needles,” she said.

Regardless, she decided to go through with the test because she wanted to know if her cancer was hereditary. She found out it wasn’t.

Having access to her genetic information is important to Burgos, as her son was born with osteogenesis imperfecta, a rare genetic disorder that causes bones to be brittle and break easily. Burgos said the condition is very rare, as only two in a million people have it. However, she said the trait was passed along to two of her grandchildren.

Because of the personal importance of genetic education, Burgos said she is constantly trying to educate her family members about genetics and sharing her own information. She also helped further the cause by attending monthly community meetings and giving feedback on community outreach and survey questions.

However, there is still a lot yet to do if All of Us wants to enroll a million participants. All of Us recruits through their website, but also plans to do community pop-ups, such as one they attended at Meriden’s Puerto Rican Festival.

“The aim of the program is to enroll a large population to reflect the diversity in the country,” Nambigne said. “So we everybody is welcome to participate in the program, no matter where they’re from, who they are.”

Latino Communities Reporter Lau Guzmán is a corps member with Report for America, a national service program that places journalists in local newsrooms. Support RFA reporters at the Record-Journal through a donation by clicking here https://bit.ly/3Pdb0re, To learn more about RFA, visit www.reportforamerica.org.